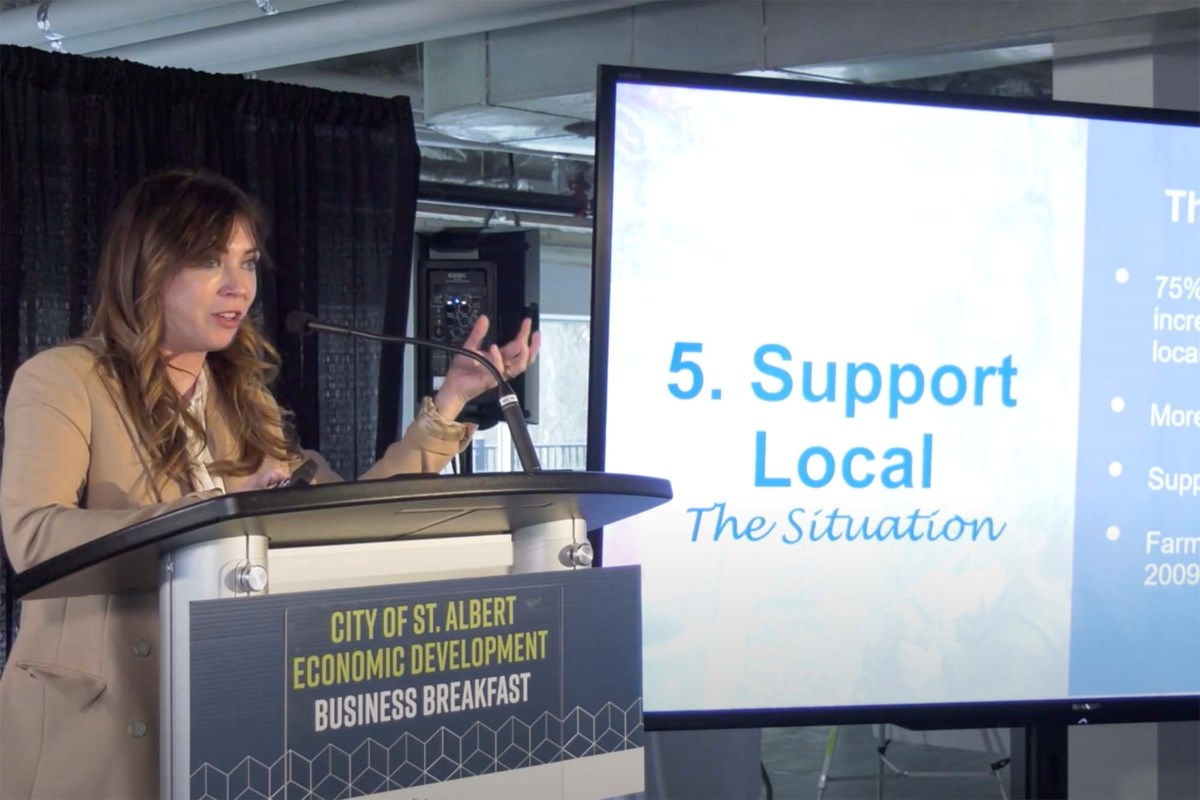 Canadians have increased their efforts to shop locally because of the pandemic as part of a broader shift in consumer values.

That’s according to Heather Thompson, executive director at the University of Alberta’s center for cities and communities (formerly known as the school of retail).

During the City of St. Albert’s annual economic development business breakfast on Tuesday, May 10, Thompson shared 12 business trends, with one being renewed consumer interest in supporting nearby stores.

Business closures during the pandemic provided consumers with first-hand knowledge of what happens when they leave the market, Thompson said. She highlighted the benefits of shopping locally, including keeping money within a local economy, and argued local businesses are stronger when it comes to supporting community causes.

Prior to the pandemic, Thompson said around 40 per cent of Canadians made a concerted effort to shop locally, a number which has ballooned to 75 per cent over the past two years.

“This is a really interesting thing to be aware of, because we’re starting to see consumers shift their values,” Thompson said.

On top of this shift, Thompson said shopping locally has become more affordable, giving the example of a spike in cost for freight containers as part of added supply-chain expenses.

“This will level out, but the costs are going to be really high and inconsistent over the next few years,” Thompson said. “It’s becoming more affordable to shop locally, and [there are] less variables. “

A few years ago, Thompson said she wouldn’t advise businesses to compete with Amazon, but now, she has found that small local businesses can have the same affordability and scalability as Amazon does, through offerings such as same-day shipping. These benefits are arriving at the same time as the binary between e-commerce and brick-and-mortar stores is collapsing, she added.

While successful brands are taking advantage of both online and in-person commerce, Thompson said how a retailer should best use its brick-and-mortar building is also changing. She gave the example of Walmart Town Center, a concept the big-box store has been working on for more than a decade, where the area typically used to house inventory gets converted into a space for leisure time.

“They really want people to say, ‘Hey, let’s go hang out at Walmart,’ which is crazy,” Thompson said. “I can’t even picture myself saying that, but they’re working really hard at it.”

Thompson said it’s worth noting that Walmart is spending heavily on research and development to come up with the concept. Some draws Walmart has considered in their planning are a café and a children’s playground.

“This is really good news for our community,” Thompson said. “As local businesses, we can do it faster and we can probably do it better.”

One trend Thompson shared is how consumers are becoming more familiar with digital interfaces.

Before the pandemic, Thompson said the number of baby boomers (people born between the years of 1946 and 1964) shopping online sat at around 55 per cent, but as of March 2022 that number has grown to 84 per cent.

Wider familiarity with e-commerce has been coupled with other shifts in how “digitally savvy” the general population is, Thompson said, highlighting how QR codes are now well-known to all consumers thanks to innovations around vaccine passports and paperless menus.

Thompson said this is starting to translate into new shopping experiences, including the potential to go into a store and be automatically billed when you walk out with an item, instead of taking the time to go through a checkout.

“These are coming really soon, and I think for the majority of consumers, we are ready for this,” Thompson said.