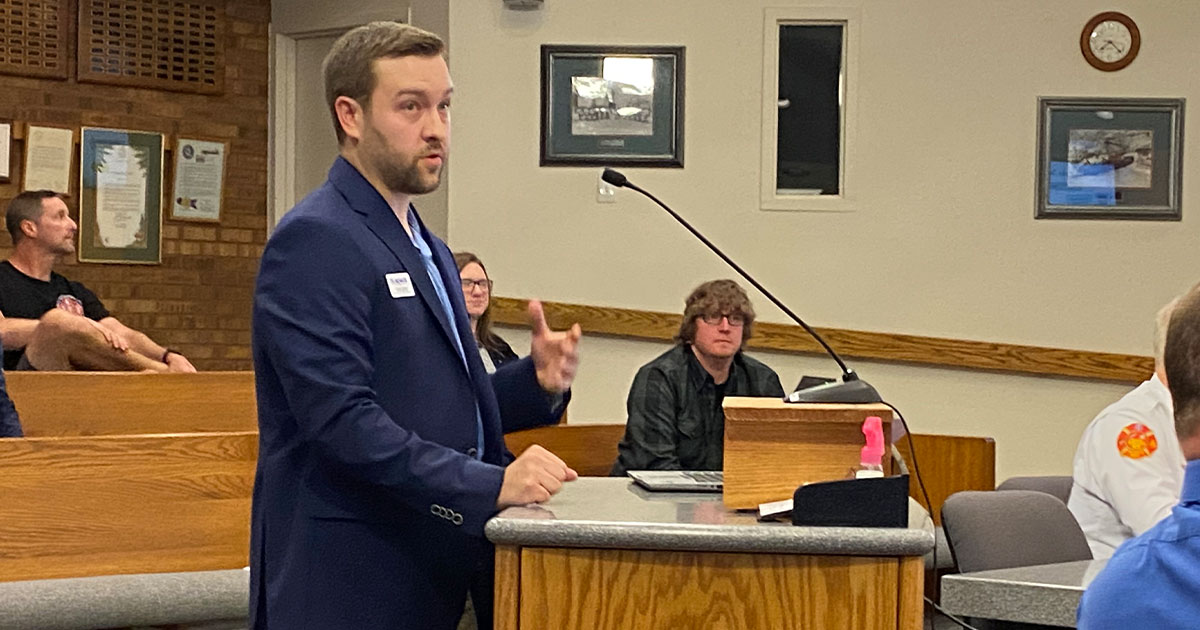 ROCK SPRINGS – An ordinance allowing a company to create a franchise agreement with the City of Rock Springs to provide residential fiber-to-the-home internet took another step forward at the City Council meeting last night.

The Council read an ordinance creating Article 11-11 “Clarity Telecom, LLC, (Vast Broadband) Franchise” within Chapter XI, Franchises and Right of Ways for the second time and will need one more reading before going to a vote.

The ordinance proposes that “Clarity Telecom, LLC, (Vast Broadband) Franchise, desires to construct, erect, renew, repair, maintain and operate in, upon, along, across under and over the streets, alleys, and all other public rights- of-way (in) the City of Rock Springs. ”

Council listened to a presentation from Casey Quinn, Bluepeak’s Government Affairs representative for Wyoming who said a franchise agreement with the City of Rock Springs is in the works. Bluepeak, formerly Vast Broadband, operates in South Dakota and Minnesota for the past 20 years.

Quinn explained that GI Partners acquired Vast Broadband last year with the intention of expanding and rebranding the company as Bluepeak. The areas they are looking to expand include North Dakota, Oklahoma, and Wyoming, he said.

“We are excited to from these long-term relationships with the cities that we go to,” Quinn said. “We want to be community partners. We are very open and transparent. We do not do any work in the shadows. ”

“I grew up in Cheyenne, Wyoming, so I know as well as anyone that communities in Wyoming are often passed over for larger cities and Bluepeak doesn’t believe that’s the case,” Quinn said. “We believe that places like Rock Springs deserve the same amenities as Chicago, LA, and New York.”

Quinn said under the agreement residents would be able to choose from 1 Gbps, 2 Gbps, and 5 Gbps with different pricing options. The company is working to provide services in Cheyenne, Casper, Laramie, and Sheridan as well. He said fiber requires less electricity and is easier to maintain which means it’s less expensive to provide. He said the 1 Gbps download speeds will apply to uploading speeds as well.

“You will not have Zoom calls that are going out. You’re downloading your video games faster than ever, ”Quinn said. “It’s the peak of broadband.”

Rock Springs Mayor Tim Kaumo said they appreciate the interest in Rock Springs, but they are a little reluctant based on the city’s easements, right of ways, and how the construction will take place.

Kaumo said the city has had problems with fiber utility companies in the past trenching and boring which caused damage to city infrastructure. He said the city’s utility easements are tight as well.

Quinn said they do work closely with cities and If the city engineer would like to meet with a company representative weekly, they will do that.

“We try to mitigate any and all damage,” Quinn said. “We got guys out in the field to make sure things are going well.”

Quinn added that the project will take between two and three years to complete.

“In the event that anything was ever damaged, although that’s not what we want to do, we pay for it. We get it fixed and we deal with it right away, ”Quinn said.

Council then completed the second reading of the ordinance after all related questions and discussion were complete.