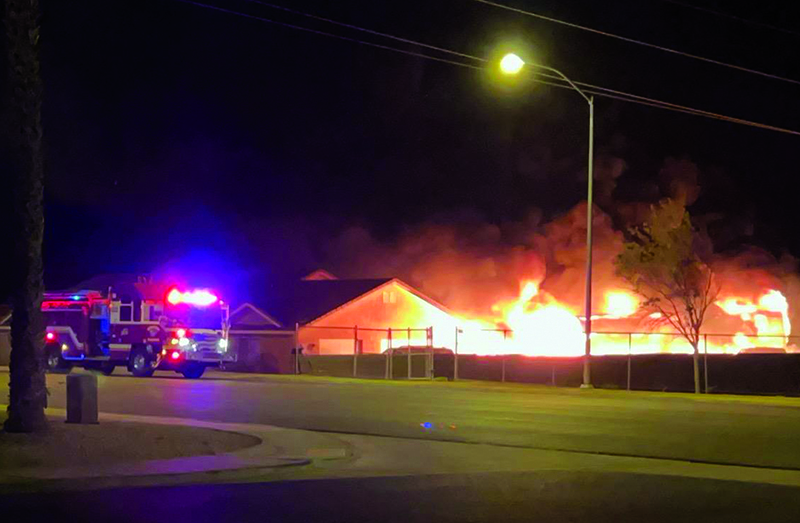 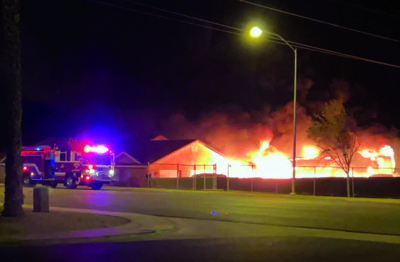 Mesquite firefighters responded to a fire which spread through a number of vehicles in a carport area and threatened a Mesquite home on Saturday night.

The crews at Mesquite Fire Department were kept busy over the weekend with a pair of residential fire incidents occurring within a 24-hour period. The department’s firefighting personnel was stretched in responding to the fires but hard work, expertise and a little good fortune avoided worst case scenarios in both cases.

The action started on Saturday night at around 10 pm when a call came in regarding a house fire on Hafen Lane. Firefighters arrived on the scene to find an RV trailer under a carport awning fully involved in flames. Three other vehicles caught fire as well in the incident.

“The awning was right next to the attached garage of the home,” said Mesquite Fire and Rescue Capt. Spencer Lewis in an interview on Monday morning. “And because of the wind at that time, the fire was just touching the eaves of the garage and the house as we arrived. The eaves were just catching fire as our guys rolled up. ”

The firefighters went to work quickly and got the flames under control before they reached the attic of the home. “It was fortunate that we got there soon enough to get water on both sides and protected the (home) structure,” Lewis said. “Even so, the smoke did get into the attic and caused some smoke damage in the home.”

Lewis said that the small number of firefighters available to respond on Saturday evening made it a challenge in fighting the fire. There were only six firefighters who responded. In addition, the Deputy Chief and Fire Chief responded to the scene making the total number 8.

“We had an EMS unit of two people who were responding to medical calls and couldn’t make it in time to help at the fire,” Lewis said.

No one was injured in the blaze. The residents were not at home at the time of the fire. Lewis said that there were some animals at the home and one of them was taken to the vet with minor injuries. 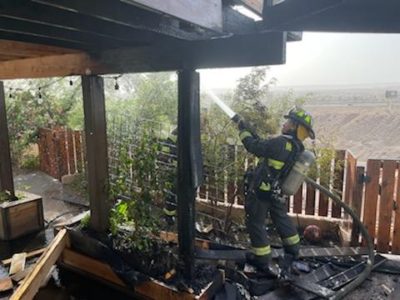 On Sunday, another fire alarm went out at about 4:30 pm. Firemen responded to find a back patio in flames on a home located near Virgin Valley High School. The fire had started from a barbecue grill being used on the patio.

“They had put stuff on the grill, set a timer and gone inside,” Lewis said. “They came back to find a fire.
Lewis said that wind may have been a factor in the spread of the blaze. But it was also a help in this particular situation, he said.

The wind was blowing off the patio instead of toward the home, ”Lewis said. “That was fortunate because, while there was significant exterior damage to the patio, it did not get to the interior structure of the home.”