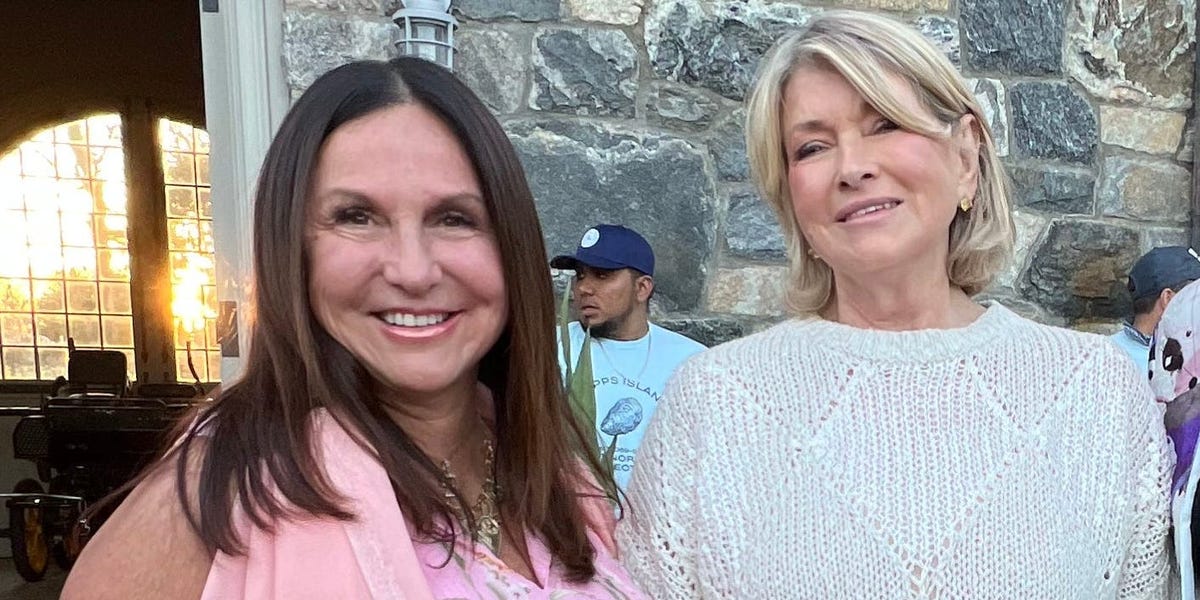 There are few people besides Martha Stewart who can make wicker furniture send one’s heart racing. So it’s no surprise that the woman who can slay any dinner party also knows how to throw one hell of a tag sale.

Over a weekend in April, Stewart threw an upscale tag sale at her sprawling Bedford, New York, estate. The lifestyle guru and TV star filmed the event for the hour-long special, “The Great American Tag Sale with Martha Stewart,” set to air on ABC on May 25.

Those who waded through Canticoe Corners – her 153-acre, not-so-quaint farm – found a vegetable greenhouse, chicken yards, coops, and stables, according to Stacy Geisinger, who told Insider about her experience attending a preview for the event.

Geisinger, who helms the lifestyle blog Stacy Knows, spent the day rubbing shoulders with celebrities including cohosts of “The View” and “Good Morning America” ​​anchor Lara Spencer while horses, peacocks, birds, and chickens roamed around the estate.

For Stacy Geisinger, Martha Stewart’s tag sale was expensive – but it seemed worth it as soon as she arrived

The experience didn’t come cheap, with Geisinger spending $ 1,000 on her exclusive preview-party ticket. The amount included food, drink, and early access to the items in the tag sale on the Friday preceding the two-day weekend bash starting the following day, which Geisinger also attended – alongside famous guests including actress Blake Lively and food stylist Judy Kim, according to People.

General-admission tickets for the weekend ranged from $ 25 to $ 250, depending on the time of day, with proceeds going to the Martha Stewart Center for Living at Mount Sinai on Manhattan’s Upper East Side.

“I wanted to go, I was having an extreme FOMO, but it was a lot of money,” Geisinger said. “My husband thinks I only spent $ 500.”

The moment she saw the vast grounds, however, Geisinger said she knew it was money well spent. “Every moment was a photo op – you knew you were at an event that was special,” she said.

But Geisinger says she made one rookie mistake while walking the long, daffodil-strewn pathway that led to the courtyard party: “I wore the wrong shoes. If you ever get invited to a Martha Stewart party, wear flats. It’s walking and more walking . ” (Luckily, Geisinger later learned there were multiple Polaris vehicles on-site to shuttle guests around the property.)

Before she could get into the event, Geisinger signed a release form for filming

As soon as she walked in, the blogger said she was asked to sign a release form for ABC giving her permission to be filmed. After acclimating to the drone cameras overhead, the blogger went exploring.

She joined attendees perusing Stewart’s vast collection of tchotchkes, clothing, furniture, and art that the lifestyle guru has amassed over decades. Of course, these aren’t just any castoffs – they’re Martha Stewart castoffs – and therein lies their appeal.

The tag-sale items included a lot of mixing bowls

Although she called it “a once-in-a-lifetime event,” Geisinger said the offerings were somewhat predictable.

“Let’s face it, there were a lot of mixing bowls – this is Martha Stewart,” Geisinger said, adding that she saw “gorgeous” framed French posters on sale for a cool $ 4,000 and “great outdoor furniture,” and noting that there were no bargains. She scooped up a set of $ 75 cake servers and a $ 10 blanket.

But she said the items she picked up “will always have a story,” and that coming from Stewart “adds a little provenance” to them.

As for Stewart, she appeared at the event in a knitted sweater, tan leather pants, and chocolate boots. The lifestyle icon schmoozed with attendees, made a speech, and took pictures, according to Geisinger – who got a few photos with Stewart.

During the three-hour afternoon cocktail party for exclusive ticket holders – the main attraction for those like Geisinger who shelled out on the $ 1,000 ticket – guests who had traveled from as far as Texas and Ohio to meet Stewart ate shrimp, oysters, and pigs in a blanket, while sipping Stewart’s “Chard” chardonnay.

But, as Geisinger found out, $ 1,000 did not buy entrance into the main house – even for the bathroom.

“Going into the home wasn’t part of the shindig,” she said, adding that guests “all went in the stable,” which she said had a powder room. “Doesn’t your stable have a powder room? It wasn’t like we were sharing it with horses,” Geisinger said. “Her stable is much nicer than most people’s homes. Every stable should have a powder room that nice!”

Overall, even though the event was expensive, Geisinger thought the experience was worth the money.

Geisinger said she’s since been grilled by friends wanting to know every detail, but the blogger has a better idea than dishing one by one: “I need to have a watch party.”