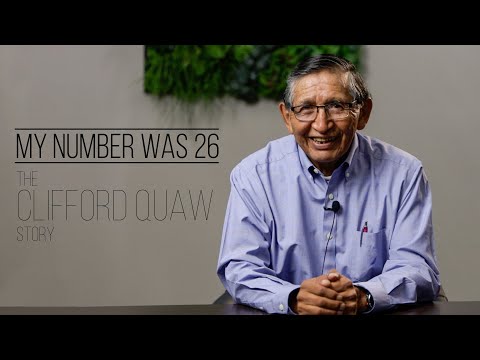 At just five years old in 1953, Quaw was forced to attend Lejac Residential School in Fraser Lake, BC where he went until 1963.

The first part of the Clifford Quaw story was published in September 2021 in honor of the first-ever National Day for Truth and Reconciliation.

Quaw recounts his time as a student at Lejac and how he was given the number 26 by teachers and staff and not called by his name, Clifford.

He has now completed telling his story in three additional installments – which were published by Lheidli T’enneh earlier this month.

“As we were recording it, I was realizing wow there’s so much more here than what we were going to record for the first part, so that is when we started talking to Lheildi T’enneh about being able to record more,” said Andrew. Johnson, of Sonic Interactive Solutions, who produced the series along with his wife and creative director Joelle Johnson.

“Let’s make sure we get as much out of Clifford as we can and get him to tell as much of the story as he can so that it doesn’t get forgotten.”

As an instructor who regularly teaches about residential schools, Clifford said recounting his story is simply oral history which he sees as part of his job as an Elder.

“What better way to learn history about residential schools than from a survivor. I am here. I went to that school and look what happened to me. Alcoholism, residential school syndrome, but I overcame it, ”said Quaw. “That is what keeps me going.”

Quaw says he hopes when people sit down and watch his story, they can gain an understanding of what residential school survivors are facing and how they pass on their trauma inadvertently.

Once when he was giving a lecture to CNC students, Quaw noted he had an ‘Aha!’ moment where he realized that intergenerational survivors of residential schools live by four words – don’t ask, don’t tell.

“You ask for help and then out comes the strap, ‘That will teach you. Don’t tell don’t tell nobody ‘and the strap comes out again. That is how we were brainwashed into keeping the secrets there, ”said Quaw.

“I had a stronger mind after I healed. When I said them four words, it is part of a teaching tool to tell the students what we had gone through. ‘Don’t ask, don’t tell’ and I still use those four words to the present day, but I ask, and I tell. “

Quaw said he envisioned a light at the end of the tunnel and that light was his future and he now focuses on the positive.

One of the moments that stands out fondly for Quaw, as he recounts the more recent events in his life story, happened just last year when he was surprised with an orange jersey embroidered with his number 26 by the Prince George Cougars.

“They turned the 26 into a positive,” beams Quaw.

“As a survivor that’s something really, really, top of the heap! To be able to do this tell the stories of what happened and to get awarded for that – To finally be recognized as an Elder that can stand up and talk to an audience about a really touchy subject like residential schools – but I didn’t expect that. ”

Andrew says he hopes Quaw’s story illuminates the details of the residential school experience and that it creates empathy.

“From the food that you ate all the way down to the way you were treated and the words that were used against you like ‘don’t speak your filthy dirty language.’ People need to understand the degree in which all of these things happened to these kids. ”

Joelle added that when they were doing interviews, she thought about how to make the Quaw’s story digestible to an adolescent audience so that it could be used in school curriculums.

“I am excited to be able to be apart of something that will help us to al understand each other better. I have learned so much from Clifford’s stories and I also want to be able to help my children understand a little bit better. ”

Andrew says he has started some discussions with School District No. 57 about editing some of the footage specifically so it can be used in school curriculums.

“We had started with the idea of ​​helping to re-edit these videos so they could be created for school curriculum so they could take that and the generate some discussion questions.”

A national Indian Residential School Crisis Line has been set up to provide support for residential school students and their families. If you are in need of counseling or support call the 24-hour national crisis line at 1-866-925-4419.