In 2011, K-Swiss took a big swing when it came to marketing.

The Los Angeles-based shoe company had been relegated to second-tier status by the Nikes and Adidases of the world and was losing ground to rising companies like Under Armor. K-Swiss had been mostly known as a tennis specialist and, in the late 1990s and early 2000s, had successfully expanded the company’s reach behind its “I Wear My K-Swiss” campaign.

Despite a relatively recognizable logo, the shoes were often regarded as preppy apparel for fancy people – a brand closer to Lacoste than Reebok. This all changed roughly a decade ago. The company’s branding took a hard left turn in hopes of attracting a new market: Bros.

It began with a simple concept: Kenny Powers, the main character from HBO’s Eastbound and Down and arguably Danny McBride’s most memorable creation, was named the brand’s new (fictional) CEO. In his new capacity, he added Patrick Willis, Jon Jones and Rey Mysterio in various roles across the company. Matt Cassel, fresh off the finest season of his NFL career, came on as Chief Marketing Officer.

Warning: this video is, as all things Kenny Powers are, wildly not safe for work unless you operate in a very cool office):

These ads, by the way? Directed by Adam McKay long before producing Succession or Winning Time.

Cassel absolutely nails his role here and provides the only K-Swiss related memories in my brain from the last two decades. I never bought any of the company’s shoes but now kinda regret this, if only because I don’t want Cassel and Powers to call me a nerd at some vague point in my future.

What specifically did I like? Oh, dear reader, I am so happy you asked.

Somewhere in the 2010s, advertisers realized they could make inroads online without having to worry about the same broadcast standards they’d find on television. The gold standard for this may be Nike’s “what the [expletive] does that mean Kobe Bryant ”Kobe System commercial, but K-Swiss had several solid entries into the NSFW oeuvre. Kenny Powers tells us right away what this is going to be. Get ready.

Generic football jersey, playsheet wristband, athletic shorts. The odds Cassel came into this meeting reeking like a gym bag are at least 50/50. 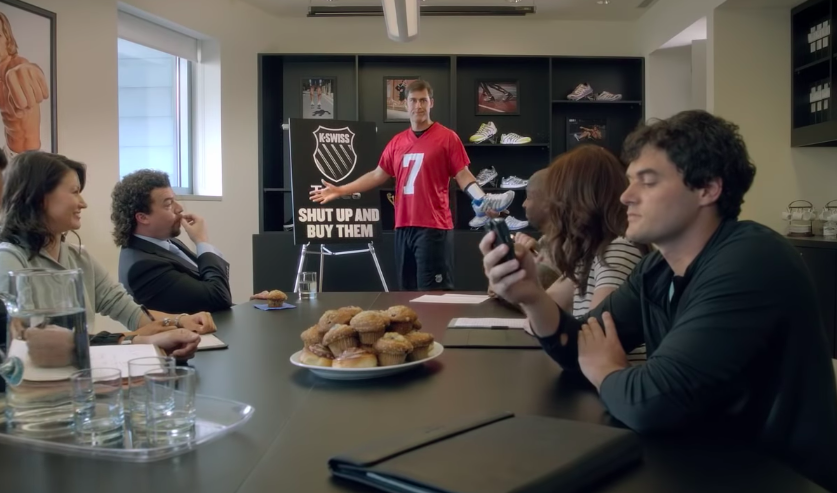 Matt Cassel is an angry man. His slogans are angry. He does not care for his coworkers. You may know him as Tom Brady’s backup or the guy who had a couple decent years with the Chiefs, but make no mistake. Matt Cassel [expletive] hates you.

The bad quarterback loves his terrible ideas, though. 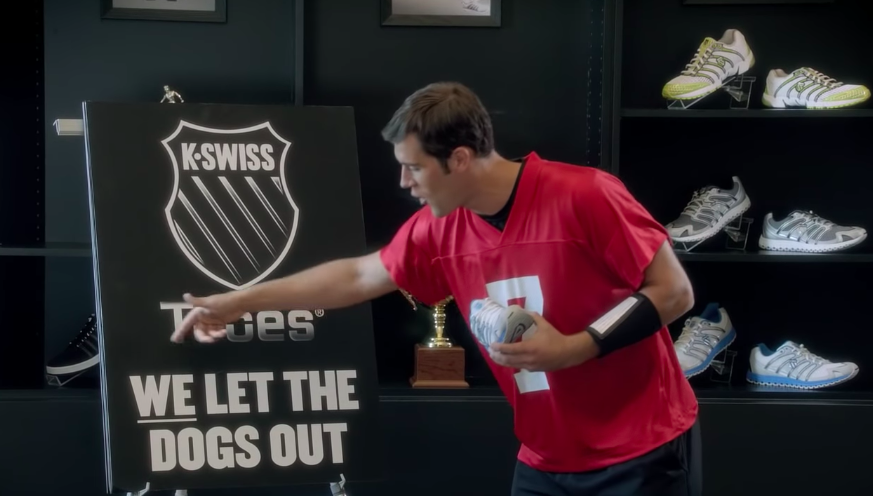 This song came out 11 years ago this commercial aired. Wonderful choice. “Who did it? We did it. Why wouldn’t we let the dogs out? ” 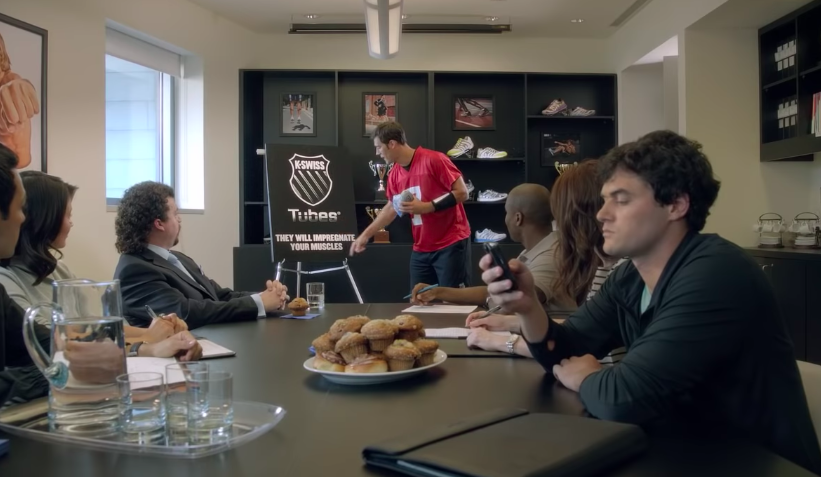 The tagline is “they will impregnate your muscles,” in case you didn’t want to zoom in. Wonderfully terrible.

In my heart, I want to believe Cassel said this on purpose. This is Michael Scott / Ricky LaFleur level wordplay. 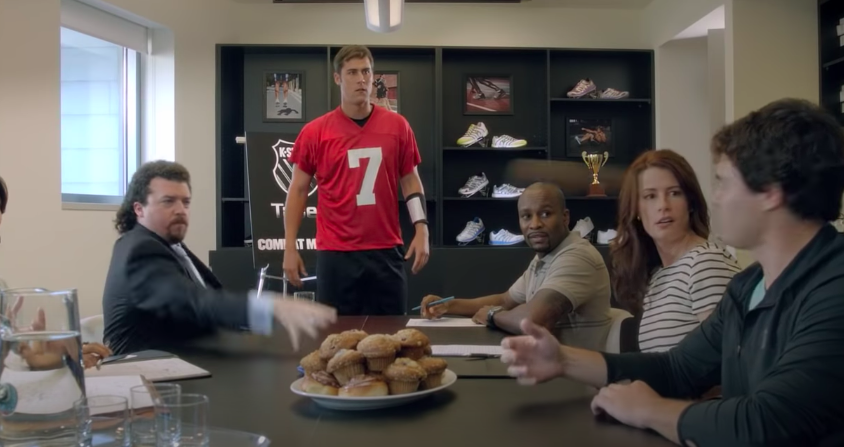 Seconds before this, Cassel knocks the guy in the black’s phone out of his hand with a shoe. That’s not that impressive; he throws things for a living.

Conversely, McBride played a major league pitcher for four seasons of a popular television show and has the throwing form of a child who grew up in a country where sports were outlawed. This is what a roided-up Kenny Powers looked like while allegedly throwing 100 mph gas: 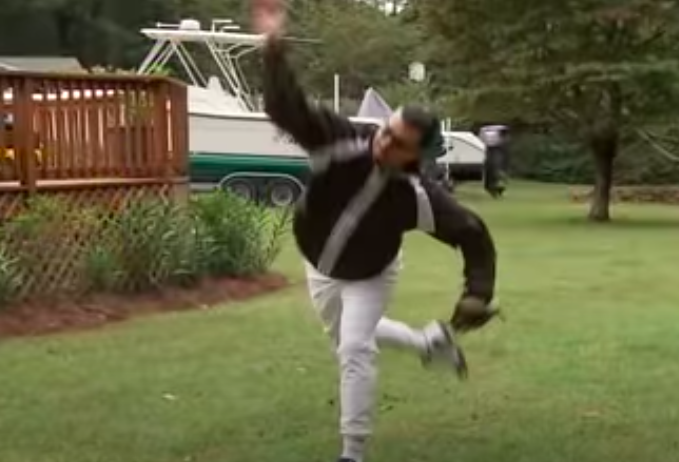 In the meeting room, we see a toss undeniably more impressive than anything he’s done from the mound. McBride absolutely nails this poor actor in the face. The reactions around the table truly say it all: 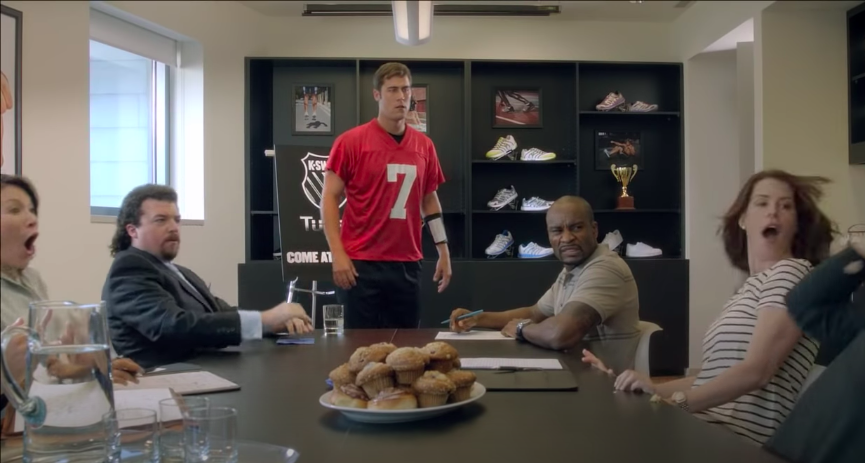