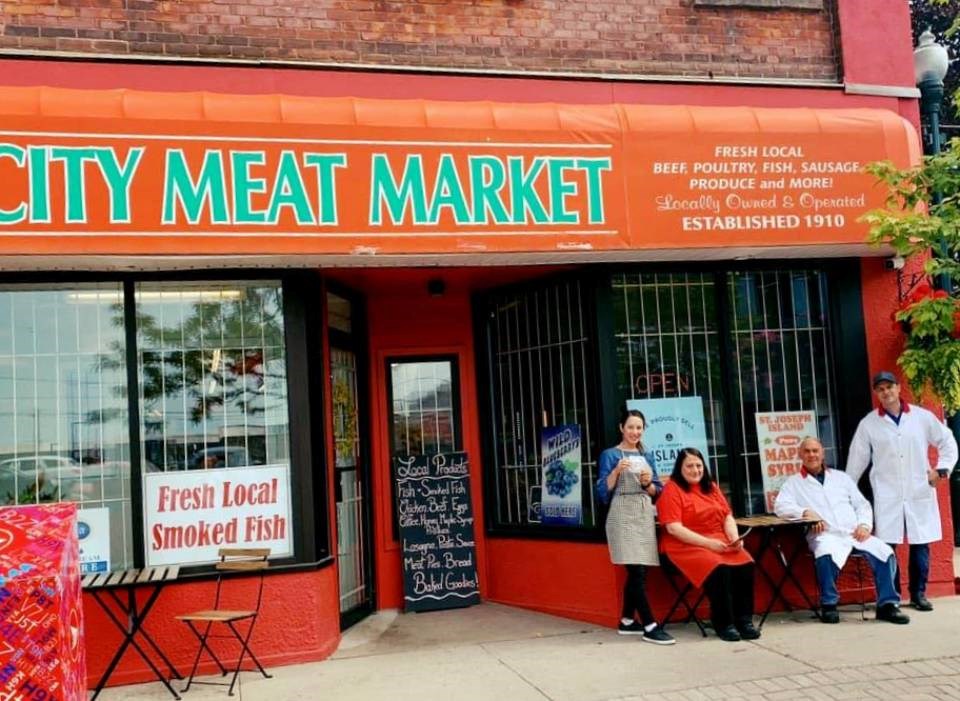 After declaring his retirement just two years earlier, her dad, John Bruni, had recently purchased the downtown Sault Ste. Marie business, fulfilling a long-time dream to own her own butcher shop.

But, as first impressions go, this was up there as one of the worst.

The store’s dingy exterior gave way to an even more rundown interior, and it became clear that, as the previous owners neared retirement, the business had been left to deteriorate and was in need of a significant overhaul.

“I didn’t know what to say,” Nowitski recalled. “But my dad said, ‘You’ve gotta look beyond the dirt, and the mess, and all the stuff; there’s potential here.'”

Nowitski – who spoke on behalf of her notoriously media-shy father – admitted it was a solid five years of long hours, lots of cleaning, and extensive renovations before the family finally felt like they had reconfigured the business into something they could be proud of .

Sixteen years later, City Meat Market, as run by the Bruni family, has become a favorite local source for high-quality meat, fresh produce, and homemade foods, which are prepared from scratch and made on site.

Lasagna, bread, fruit and meat pies, pasta sauce, and meatballs are among the items the family crafts by hand to sell in store, much of it prepared in single servings to cater to their elderly clientele.

“Now you walk in and it smells so good in here,” Nowitski said.

“My dad bakes fresh bread every morning, you have the fresh meat cutting, and sometimes there’s a pot of sauce in the kitchen in the back…. You’re smelling all those aromas and then you’re smelling the fresh meat, so it’s a nice feeling; people feel like they’re at home. ”

Much of City Meat Market’s early history is lost to time, but the business has only been run by a handful of owners since its 1910 inception, “which is pretty remarkable,” Nowitski said.

Equally notable is her family personal journey to entrepreneurship, which began when he was just 12 years old, after his family immigrated to Canada.

Arriving in Sault Ste. Marie with modest means, Bruni forfeited an education in favor of earning a living to help support her family.

After landing work at Palace Meat Market, he set out to learn the trade of meat cutting where he showed early promise as a skilled and capable butcher.

“They gave him the full-time opportunity because he needed to provide for his family; that was just the reality of that era, ”Nowitski said.

“Coming from Europe with nothing, all they had was a suitcase and some hope that they would have an opportunity here. So that was his goal. And he did provide for his family. He helped them buy their first home. ”

Want to read more business news from the North? Subscribe to our newsletter.

Bruni spent 35 years working for other people, along the way marrying his wife, Rosina, with whom he raised three children.

Trying to strike a balance between work and family obligations, Bruni put his business ambitions on the backburner, but they were never far from his thoughts, Nowitski said.

His vision resurfaced all those years later when he purchased City Meat Market, working alongside his wife, his daughter, and his son-in-law, Jamie Elliot.

In nearly two decades, Bruni has never veered from his rigorous work schedule, arriving at the store by 3:30 am to bake fresh bread and prepare the meat for the day.

Customers who have shopped with City Meat Market over the years have become friends, many of them coming in to speak directly with Bruni, who greets them by name and will often pause in his work for a chat over coffee.

“He’s all in; he doesn’t do anything half, ”Nowitski said. “He does it 100 per cent with his heart, and his motto is if he won’t eat the meat, or if it’s not to his expectations, he won’t sell it.”

The family works with local producers to bring in products grown or made in the region and is continuously looking to incorporate more local products to support Algoma’s economy, Nowitski said.

That includes beef from Penokean Hills Farms, fish from Agawa Fishery, coffee from St. Joseph Island Coffee Roasters, and milk from Lock City Dairies, along with maple syrup, honey, eggs, lamb and chicken, all produced nearby.

Demand for local products has exploded over the last two years, Nowitski noted, and in the early days of the pandemic, staff was scrambling to meet the need.

At one point, staff were answering four different phones taking orders for frantic customers panicking about getting food. In most cases, staff were able to fill orders within 24 hours, offering curbside pickup and making deliveries to those who couldn’t venture out.

“We still have people coming in and thanking us for what we did,” Nowitski said, adding the family feels “blessed” to have such loyal customers.

It was during those turbulent times that the local producers were the most reliable, maintaining fair prices and regular delivery schedules to ensure the store could serve their customers, she added.

In October, City Meat Market will celebrate its 17th year in operation. Business is brisk, but the family has started talking about what happens next.

Running a family enterprise is tough, requiring long hours and few holidays or days off, Nowitski noted. And when the entire family is involved, there are few opportunities to spend time together outside the shop.

A teacher by training, Nowitski said she’s committed to working 20 years at the store before she wants to explore other interests.

But she’s hopeful that the family butcher shop – her dad’s dream and the culmination of a lifetime of hard work – will remain in the family.

“It can be a lot, and overwhelming at times, when you’re trying to balance work and family life, but we make it work,” she said.

“I don’t know what the future holds, but I can honestly say we’ve put our heart and souls into it.”

This article is one in a series focused on the rich histories, journeys and long-term successes of generational businesses in Northern Ontario.