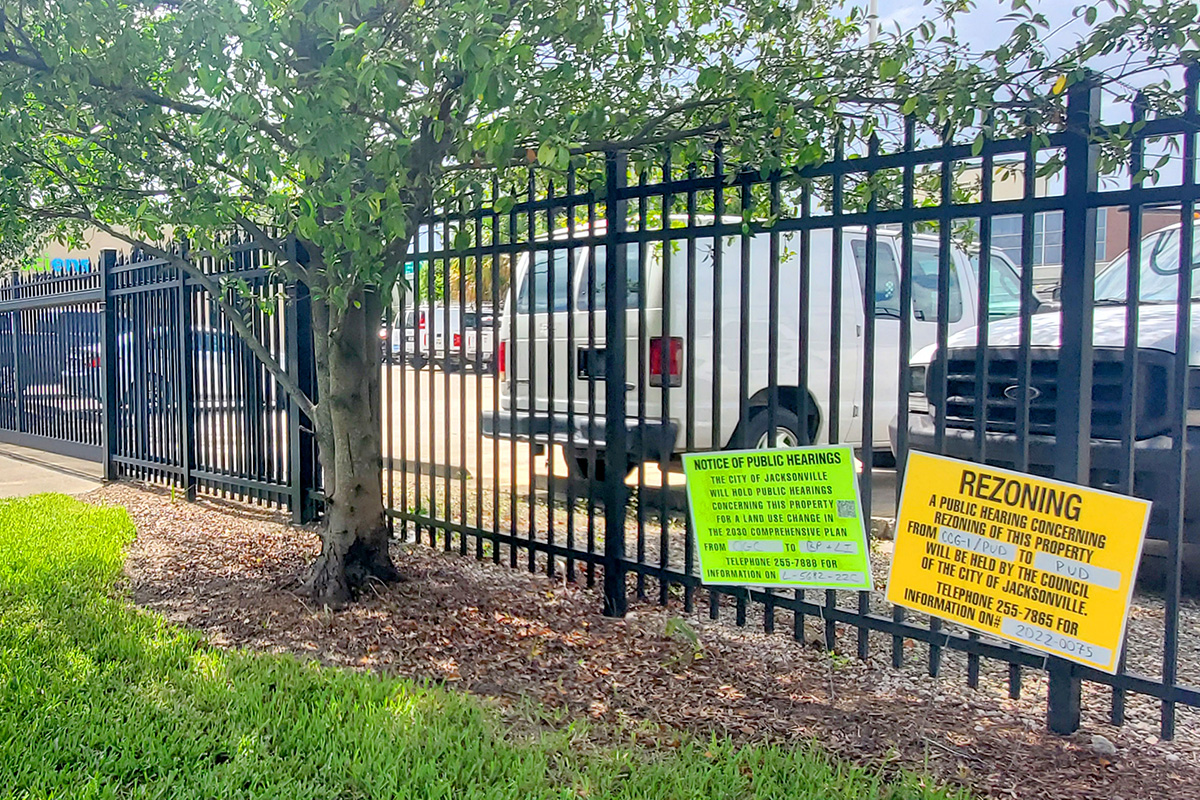 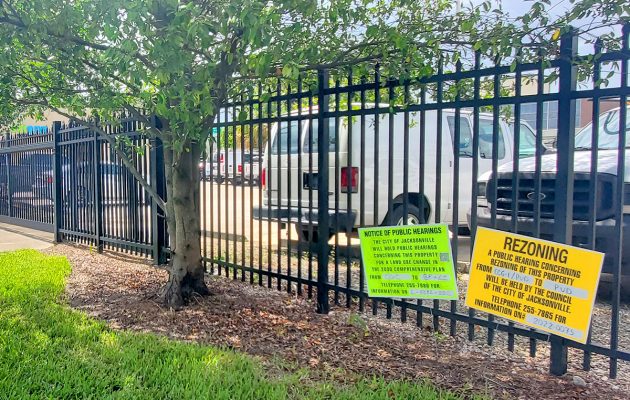 Portion of the property recently bought by Mayberry Electric of Atlanta and now up for rezoning during public hearings this month.

Miller Electric sold its former headquarters on 4.3 acres in Riverside for more than $5.85-million to Paul Mayberry, founder of an Atlanta-based electric company.

Despite the sale, neighbors remain concerned about the potential for more intense commercial use of the property.

They cite the limited ingress and egress to the property and traffic safety concerns. They also fear redevelopment of bungalows in the area will likely add more vehicles to the blocks sandwiched between Interstate 10 on the north and Gilmore Street on the south, including both sides of Rosselle Street, and mostly east of Osceola Street and west of Copeland Street.

The property in Riverside includes four parcels, one of them vacant today. Most of the space is leased today to Sciens Building Solutions, which specializes in fire protection, security, communications and electrical systems as a subsidiary of WW Gay.

Prior to the sale, Miller Electric sought to rezone the property and replace two zoning designations today with one. Some of the property is zoned planned unit development (PUD), a flexible zoning designation under which the restrictions are negotiated with city planners. Other portions have a community general commercial (CGC) designation, which is more conventional.

But the potential for more PUD zoning sparked opposition from nearby residents. Miller wanted to change the land use on two parcels from commercial general to light industrial, which residents feared would include more intensive activities that could become nuisances.

Robin Lumb, a former city councilman who resides on Gilmore Street, has been monitoring the progress of the rezoning application with city planners for months.

“Apparently, the change in ownership means starting the clock over again on the rezoning process,” Mr. Lumb said by email in July after receiving an updated schedule for public hearings related to the rezoning.

“Due to the recent change in property ownership and the [city planning] department not having updated authorization forms from the new owners, we are deferring the release of the staff reports one cycle,” said city planner Arimus Wells in June after the sale.

“I and my neighbors on Gilmore Street are strongly opposed to any rezoning,” Mr. Lumb recently wrote to city planners. “We believe the rights conferred to the property owner under the current CCG1 zoning (and the existing minor PUD) are sufficient to allow for a range of profitable uses. Apparently, these rights were also sufficient to induce a buyer to purchase the Miler Electric property earlier this month for $5.85 million.”

Mr. Lumb also fears tenants today “may be engaged in activities that are not allowed under the exiting CCG1 zoning and that the purpose of this rezoning is to bring about some form of retroactive compliance.”

“If this is the case, the obvious solution is to identify the specific requirements of the existing tenants and to limit any rezoning to accommodate those requirements,” said the 27-year Gilmore Street resident. “I’m confident the neighborhood would be willing to work with the applicant under these circumstances to achieve a workable compromise.

“But trying to cure a zoning deficiency with a PUD that requires a land use change and an up-zoning to a ‘business park’ is overkill that risks significant collateral damage.”

The historic overlay in Riverside designates the property as wholly part of an area of ​​residential character, so Mr. Lumb argues any more intensive use of the property would contradict the intent of the overlay.

“All meetings will take place in the city hall. Based on this timeline, the staff reports will be released Friday, July 29. We should have an updated written description/site plan to share with you soon,” said Mr. Wells in an email to Riverside Avondale Preservation’s executive director Shannon Blankenship in mid -July.