Saskatoon Police and firefighters were called to a house fire last night in the 200 block of Clarence Avenue South. Shortly before 11 pm the police service advised that vehicle and pedestrian restrictions were in place but no other details have been provided. Meanwhile, about three hours earlier, the Saskatoon Fire Department responded to 911 calls of flames behind a building in the 1900 block of Ontario Avenue. The caller said the flames were 30 feet, or about nine meters high. 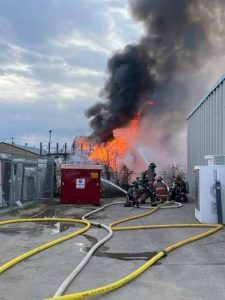 Fire crews had to cut fencing to gain access to the commercial business yard where a sea can with motorcycles, pallets and landscape fabric were burning. At 8:25 pm the fire was under control, about 55 minutes after the call came in. A skid steer operated by employees of the business was utilized to move and spread items around the yard so fire crews could ensure the fire was fully extinguished. The Fire Investigator indicates cause of fire is undetermined but it originated in some pallets stored in the yard that spread to other items. Damage is estimated at $ 300,000.

At 10:07 pm the Saskatoon Fire Department was called to a house fire in the 200 block of Clarence Avenue South. When crews arrived they could se flames coming from the roof of the building. Heat was identified in the exterior walls behind the stucco so firefighters cut the stucco and cooled the area. That fire was caused by careless disposal of smoking material. Damage is estimated at $ 50,000 and the fire began outside the front step to the house. 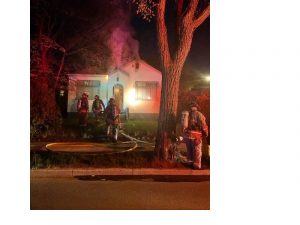 Two minutes after midnight, the Saskatoon Fire Department received a report of fire in a suite in the 600 Block of Appleby Drive. The building occupants were evacuating at the time of the call and the fire was located in a suite on the first floor. The blaze was brought under control at 12:26 am The Fire Investigator attended the scene and determined the fire has caused $ 50,000 damage. Cause of the fire is suspicious and turned over to the Saskatoon Police Service for their follow up.