As fuel prices crept towards $ 2.00 / liter during the first quarter of 2022, a particularly comparable group of nine cars combined to produce a hugely significant chunk of extra market share.

Their similarities? Four doors, front and / or all-wheel drive, base prices at or below $ 30,000, efficient four-cylinder engines, and surging sales volume. Then there was the biggest similarity of all – they were available in sufficient numbers to generate more sales in 2022’s first-quarter than during the same period one year ago.

The desire for improved fuel efficiency in a high-price fuel era may have no bearing on the matter. With dealers unable to build any kind of inventory whatsoever, simply being available is enough to spur big increases.

On the one hand, Canada’s overall new vehicle market suffered a 12-per-cent year-over-year decline worth nearly 50,000 lost sales in Q1. The car market (excluding the nine cars we’re discussing) plunged 26 per cent, a loss of more than 13,000 units in only three months. Car sales at BMW tumbled 36 per cent, Cadillac’s cars were down 38 per cent, and even Toyota took a 30-per-cent hit. It gets worse: Volkswagen’s car volume fell off a cliff, dropping 82 per cent, equivalent to almost 5,000 fewer sales.

In an environment like this, any improvement is noticeable. But these nine affordable, efficient, and at least somewhat available cars didn’t merely produce a modest uptick; they turned 2021’s first-quarter share of the car market – 21 per cent – into a 31-per-cent grab.

Canadian sales of the Mazda 3 have been in steady decline for more than a decade. Over 50,000 3s were sold as recently as 2008. By 2015, Mazda was no longer able to sell 40,000 3s annually. By pre-pandemic 2019, Mazda Canada’s total 3 volume was down to only 21,276 units. In other words, don’t interpret 2022’s first-quarter increase to mean the 3 is back. It’s not, at least not at the level to which we were accustomed. But in an unhealthy market that has Toyota Corolla sales down 34 per cent and the Volkswagen Jetta down 86 per cent, the 3’s 16-per-cent uptick is a welcome turnaround for Mazda.

While it’s true General Motors is mostly out of the car business in North America, the company hasn’t completely exited. Cadillac’s still making a faltering go of it, and Chevrolet is still selling sports cars and, yes, even Malibus. In fact, nearly 60 per cent of the cars built by GM during the early part of 2022 were Malibus. Of Canadian midsize car sales in 2022’s first-quarter, 16 per cent were Malibus, up from 11 per cent a year ago.

Rewind a decade. In 2012, what was Subaru Canada’s best-selling car? The Party. At 11,212 units, the Impreza ended 2012 as Subaru Canada’s best-selling car for the last time, generating over one-third of the company’s sales. Now Subaru’s top seller is the tall hatch spawned by the Impreza: the Crosstrek. The Impreza now accounts for fewer than 10 per cent of Subaru’s sales, but in a lineup that (Impreza aside) is down 7 per cent, the Impreza’s 2022 rise is particularly helpful.

Not a full-size SUV. Not a subcompact crossover. Not an in-demand minivan. Not a hyped-up electric. No, Kia’s best-selling vehicle in 2022’s first-quarter is the Forte, a compact sedan / hatch lineup. Kia Canada has added 551 Forte sales during the first three months of the year at a time when the brand’s poorly-stocked SUVs are down by more than a fifth, a loss of more than 2,200 sales.

Not since 2016 has the Hyundai Elantra ended a year as Canada’s second-best-selling car. Yet through the first-quarter of 2022, that’s where the Elantra stands: ahead of the Toyota Corolla but behind the Honda Civic. The seventh-gen Elantra was introduced for the 2021 model year. The styling may seem divisive, but that hasn’t stopped the Elantra from grabbing heaps of extra market share. 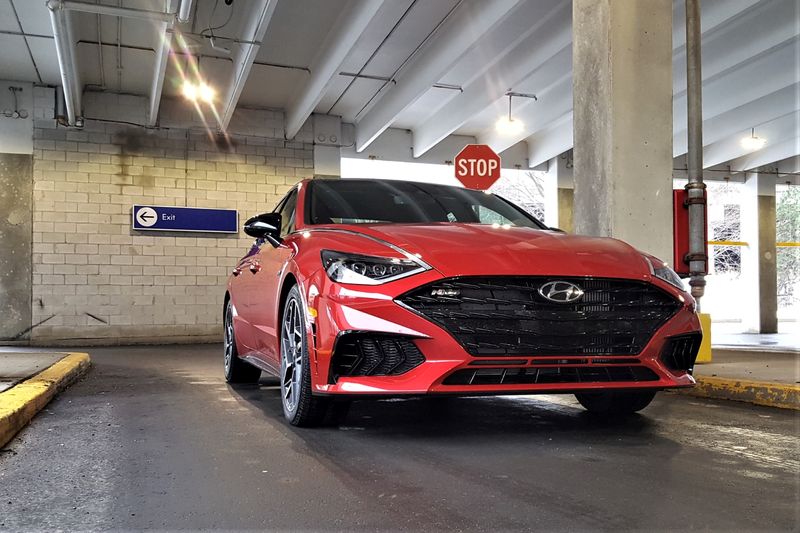 It’s not just the Elantra. Hyundai’s midsize sedan has also ratcheted up its sales totals in early 2022. Granted, Hyundai’s not selling Sonatas like it’s 2011 – Hyundai was moving nearly 1,400 per month when the sixth-gen car was still fresh. Now in its eighth iteration, Hyundai has grown its market share to 16 per cent in 2022, up from 9 per cent a year ago and actually slightly better than 2011, as well.

Kia dealers who can’t get their hands on boxy Tellurides (notorious for additional dealer markups south of the border) are able to get their hands on boxy Souls. Okay, maybe they’re going after slightly different corners of the market. But the Soul’s recent resurgence has been a key factor in Kia Canada’s relatively modest 6-per-cent downturn in 2022’s first-quarter. Kia’s added 693 sales to the Soul’s first-quarter ledger this year.

To be fair, the Altima isn’t priced under $ 30,000. Its official MSRP is a hair above at $ 30,198. The Altima certainly hits the fuel efficiency target at 6.5 L / 100 km on the highway. Canada’s midsize leaders struggled in 2022’s first-quarter – the Toyota Camry and Honda Accord combined to lose more than 300 sales per month. Altima volume, on the other hand, was twice as strong as it was at the start of 2021.

Often mocked and ridiculed for its third-world rental car vibes, the Mitsubishi Mirage has one key element working in its favor: disappearing competitors. Not only are conventional subcompacts such as the Toyota Yaris, Hyundai Accent, and Chevrolet Sonic off the market, so too are the Mirage’s more direct rivals. The Nissan Micra called it quits in 2019 and GM pulled the plug on the Spark earlier this year. Canadians looking for a sub- $ 15K new car now have one option: the Mitsubishi Mirage.

Sign up to receive Driving.ca’s Blind-Spot Monitor newsletter on Wednesdays and Saturdays

Thanks for signing up!

A welcome email is on its way. If you don’t see it, please check your junk folder.

The next issue of Driving.ca’s Blind-Spot Monitor will soon be in your inbox.

We encountered an issue signing you up. Please try again