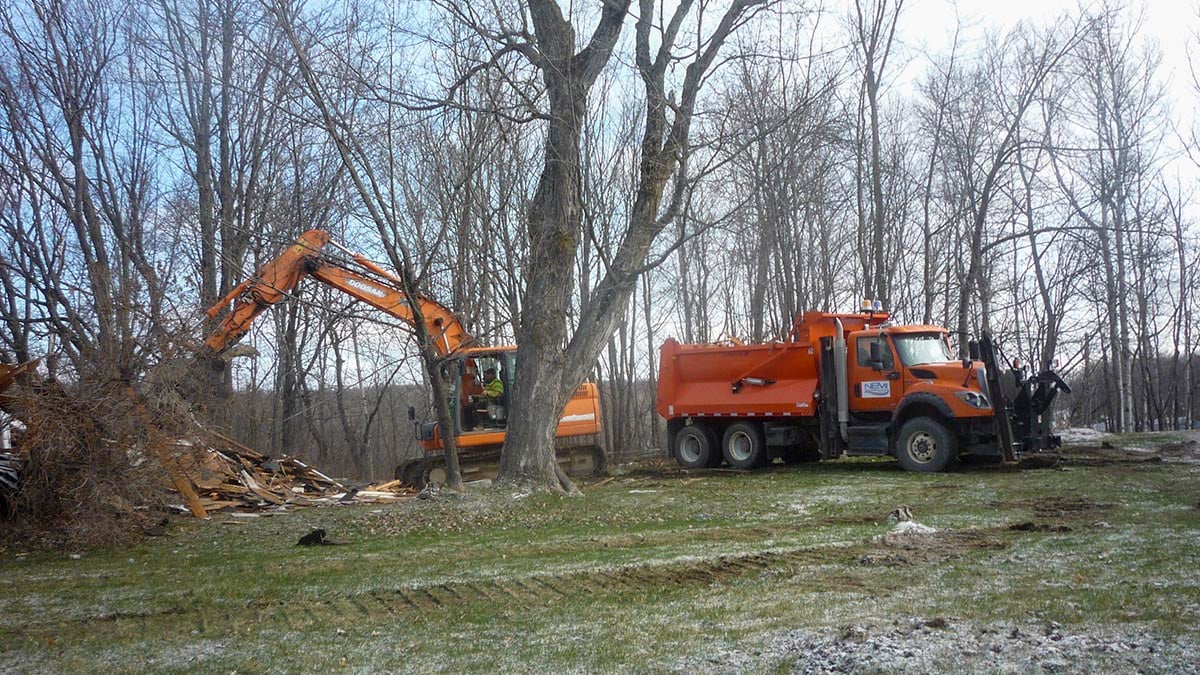 SHEGUIANDAH — Less than 12 hours after a motion was carried by Northeast Town council to donate the historic St. Peter’s Anglican Church property on Townline Road in Sheguiandah to the neighboring Sheguiandah Senior’s Hall for the creation of a parking lot, the church was demolished, leaving some community members and former parishioners reeling.

Council received a letter from the seniors’ hall board asking council to consider donating the municipally-owned property, which contains the church, so that they might create more parking. Parking is currently at a premium for the bustling community hall. CAO Dave Williamson reminded council that the topic has been discussed before.

“The building is not salvageable,” he told council. “It simply came to our notice then. There are no artifacts left inside, it’s just the building. ” He went on to call the building “unsafe.”

Councilor Michael Erskine recalled that several years earlier, the municipality canvassed the community about restoring St. Peter’s church but didn’t get much back by way of positive response. He went on to note the “valuable service” the seniors’ hall provides to the community. “I am in full support,” he said of the motion

Councilor Jim Ferguson said he agreed with Councilor Erskine. “Because the building is unsalvageable, I think it’s good to give it to them (the seniors’ hall).”

Councilor Barb Baker asked about demolition costs, to which the CAO replied that it would be done by public works crews, so a minimal cost.

Councilor Laurie Cook asked about the history of the church. Mr. Williamson shared that the church was built in 1883 and that it is part of the Sheguiandah historic walking trail, and that the seniors’ group would be asked to keep the plaque marking it as such on the property.

Councilor Cook noted the church’s historic value and asked if there would be any appetite to put the church out to tender, for anyone wishing to restore it. “I hate to see historic buildings torn down,” she added.

The CAO explained that the foundation is damaged and the walls bowed out so a complete rebuild would be required.

A motion to demolish the church and donate it to the Sheguiandah Seniors’ Hall was moved by Councilor Erskine and seconded by Councilor Al Boyd. The motion was carried.

The very next morning, the church was demolished.

“To see the church gone is beyond understanding,” said Christina Jones, a hamlet of Sheguiandah resident and former member of the Northeast Town council. “They (council) passed a motion Tuesday night and by 7:00 am the public works crew was out to knock it down. The town knew that if people found out they would be doing this quickly, they would be very upset. I know I am. ”

“I understand the only councilor who voted against the motion was Laurie (Cook) so kudos to her,” said Ms. Jones. “It bothers me out here that three council members in ward four all voted ‘yes’ on the motion.”

“It would have been nice if they had a little service or get together, even outside the church to say one final goodbye to all the people that have attended and used that church over the years,” said Ms. Jones. “I don’t think they should have just destroyed the building.”

“It’s the underhanded way that council did this, that bothers me,” said former Sheguiandah resident Linda Bowerman. “To think the church had been gifted to the town for a $ 1 by the Anglican Diocese of Algoma and this is what they did to it.”

“Its gone and done and there is nothing we can do about it now,” said Ms. Bowerman. “What hurts is that we were never even given a chance to collect some of the items from the church, like the stained glass window that had been donated by Reverend Frederick Frost. Council held their meeting Tuesday night and passed a motion to have the church demolished and by 7:00 am the next morning it was down. Something is wrong with that. And why were we never notified about any of this? ”

“It’s just sad,” she said. Bowerman. She pointed out Mayor Al MacNevin had indicated that the door of the front of the church had been saved as well as the pews, windows and bells.

“The town had said in 2014 it had no money to fix up the church but started to put money into reserve in 2014,” said Ms. Bowerman. “And the seniors hall had already been gifted the parking lot on the other side of the hall, now they have this property to use as a parking lot as well.”

“I spent about 25 years attending the church,” said Ms. Bowerman. “When I got the call at 7:30 am this morning, the church was already down. If it had been left standing and people had the chance to take some of the boards, for instance, we could have done some things with it. ”

“It is another piece of our history that is now gone,” said Ms. Bowerman.

“The town has been talking about tearing down the church since 2014, but there was no notice it was going to take place this morning,” said Ms. Jones. “They could have taken the belfry to the museum and put the bell back in it. We don’t do very well with historical things in this town. ”

Tom Batman, who at one time had spent funds and put a new roof on the church, told The Expositor, “Burt and Leila Dunlop were the last surviving members of the church. The church, along with everything in it and the property were turned over to the town. If people had concerns, that would have been the time to bring them forward. ”

Mr. Batman’s company, Batman Construction, had a new roof and side vestibule on the church in 2006. ”At the time, there was a lot of discussion about the church. But as time went on, interest declined. ”

“Yes, it’s disturbing to see the church brought down, see it happen,” said Mr. Batman. “I was born and raised here but the costs to fix it up would have been high and we (taxpayers) would not have been able to afford the cost. I’ve been on council and I understand how these things work. Most years there is no money for extra things that should, but can’t, be done. ”

Mr. Batman said that, when “a building like this church is closed for a long time, it declines. And there is no heat in the building. I can understand the logistics as to why the church was closed. $ 100,000 would not repair the church. The foundation is cracked and the walls are splitting. And there is mold and mildew. I’m not a member of the Anglican church, it was a unique building, but one that the town couldn’t afford. ”

Chris Dunlop, who had attended church growing up in Sheguiandah (one of the aforementioned Burt and Leila’s five sons), said the council’s decision seemed pretty quick, passing a motion at a meeting Tuesday and having the church torn down the next morning. They took the pews and we got the front door that my dad and mother had donated to the church. But I understand the rest of the church was torn down. None of the relatives of the families who had helped run and attended church for many years were notified to see if they wanted anything out of the church. This didn’t have to be done as fast as it was. ”

Mayor MacNevin said, “The church, for a number of years, has been deemed to be unsafe. The walls are bowed and the foundation is damaged and there is a lot of mold and mildew in the building. At one time someone suggested it should be moved, but the building would have fallen apart. All the materials like the stained glass windows, bells, the pews and the door were all taken out. ”

“We took the responsible approach to this, everything of value like the one stained glass window, the pews, the front door donated by the Dunlop family were all removed from the church prior to its (demolition),” said Mr. Williamson.

“The church was absolutely beyond repair,” said Mr. Williamson. “In 2014, a report was carried out by the chief building official and the report stated the walls were warped, foundation cracked, there was mold and mildew and there was the smell of dead animals under the building. There was no salvaging the structure. ”

The book ‘Reflections of Howland, Little Current and Vicinity’ explains that, “The little church, built in 1883, is found a short distance westward from the intersection of Highway six and the Townline Road.

“The other Anglican Church was built in 1885 for the natives on the Sheguiandah Reserve. Rev. Frost was the priest for both churches. His home was situated beside St. Andrew’s on the reserve. When it burned on May 18, 1893 a new, larger rectory, was built on the east end of Robert Street overlooking Sheguiandah Bay.

“Both churches are similar in description. They each have a small entrance with a belfry and bell, a working pump organ, and almost identical alters. There are plaques in memory of Rev. Frost’s wife and an array of photos of priests and congregations through the years. ”

“A stained glass window in memory of David Lewis graces the east side of St. Peter’s church. He was one of the first pioneers of Sheguiandah and he deeded the property upon which St. Peter’s was built.

“The picturesque little church served the needs of such families as: Lewis, Dunlop, Myers, Orr, Hembruff, Atkinson and Stringer, to name a few.”

“Due to a declining congregation it became impractical to keep the church open. The people of St. Peter’s church, Sheguiandah, petitioned the Diocese of Algoma for closure and deconsecration of the church. On April 29, 2004, the Venerable Tom Corston, Archdeacon of Sudbury / Manitoulin, was authorized by the Bishop of Algoma, the Right Reverend Roland Ferris to conduct such a service. ”