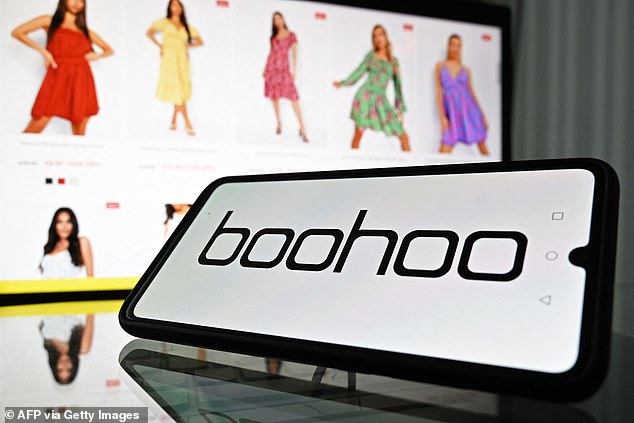 Boohoo’s pre-tax profits for the year to the end of February slumped to £7.8million, down from £124.7million a year earlier, amid sky-high freight and distribution costs and dwindling shopper demand.

The online fast-fashion company warned its revenue was unlikely to grow in the first half of the year, amid shifting post-pandemic shopping habits, high return levels and the cost of living squeeze.

While the group said it was continuing with cost-cutting measures across its operations, it suggested prices for shoppers could also rise this year.

The group said it would ‘mitigate where possible before passing prices on to consumers.’

Price hikes on the cards? Boohoo said it would ‘mitigate where possible before passing prices on to consumers’

Steep cost hikes and lower-than-anticipated growth contributed to a £60million hit to profits over the past year, the group said.

The company also warned that ‘pandemic-related external factors’ look set to hit the group again this year, just have they have done in the last 12 months.

Boohoo shares have fallen more than 13 per cent or 10.8p to 69.2p this morning, having plummeted over 78 per cent in the past year.

The group reported a 28 per cent drop in annual core earnings. Adjusted earnings before interest, tax, depreciation and amortization reached £125million in the year to 28 February, which was in line with guidance, but down from £173.6milion the previous year.

John Lyttle, Boohoo’s chief executive, said: ‘Over the past two years, we have significantly increased market share in our core geographies of the UK and the US, and we have grown active customer numbers by 43 per cent across the group to 20million.

‘Our focus over the past two years has been on investing to build a strong platform, with the right infrastructure, supported by increased capacity to better serve our customers.

‘In the year ahead we are focussed on optimizing our operations through increasing flexibility within our supply chain, landing key efficiency projects and progressing strategic initiatives such as wholesale and our US distribution centre. This will ensure that the group is well-positioned to rebound strongly as pandemic-related headwinds ease.’ 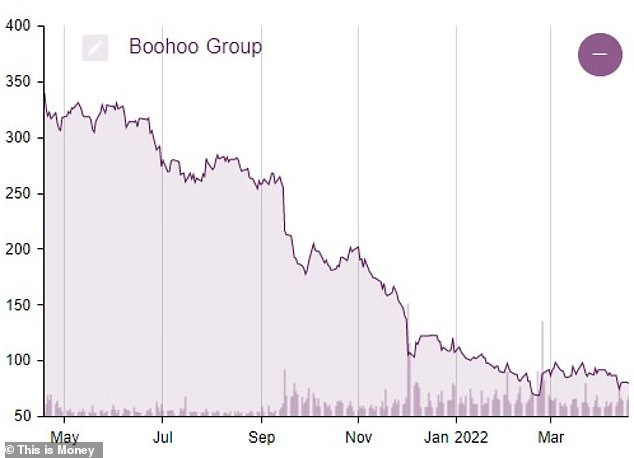 Plummeting: Boohoo’s share price has fallen sharply over the past year

Sales were up 14 per cent on the year to £2billion and remain well above pre-pandemic levels.

Boohoo said that while customers have flocked back to physical stores since the easing of lockdown restrictions, those using its services have increased the number of garments being returned.

Amid the easing of restrictions, customers have started going out more and return rates have increased to above the level seen before the pandemic.

Boohoo also revealed that return rates have been so high in the past three months that this has led to sales falling compared with a year ago.

It said: ‘The group currently expects revenue growth to be broadly flat in the first half of FY2023, as relatively higher returns rates lead to net sales being down year on year in the first quarter, with a return to growth in the second quarter. “

The rising costs of deliveries for the company – including a reduction in airfreight capacity and higher shipping prices – along with lower-than-anticipated growth contributed to a £60 million hit to profits, it added.

In a bid to turn its fortunes around again, Boohoo said it planned to target sourcing from suppliers closer to the UK, reducing inventory levels and investing in new distribution hubs in the US.

Having previously been embroiled in controversy over allegations of poor working conditions at some of its supplier factories, Boohoo said today: ‘Global supplier and factory lists have been published, as well as our responsible purchasing practices.

‘More robust supplier standards and a rigorous management program have been implemented by our sourcing teams, supported by improved systems to order, monitor and track products ordered from our suppliers.’

Julie Palmer, an analyst at Begbies Traynor, said: ‘The outlook isn’t pretty, with inflation a real concern for this outfit, and falling consumer confidence may mean customers thinking twice before refreshing their wardrobes as we head into summer.

‘Throw in the costs of a new factory in Leicester after allegations two years ago the company wasn’t paying workers the minimum wage, along with spending on new distribution centers as it prepares for hoped-for expansion, and Boohoo has a lot of ground to make up.

‘Boohoo is going to have to come up with some new looks if it is going to stay relevant as it doesn’t take long for consumers to shop around for faster, more relevant alternatives these days.’