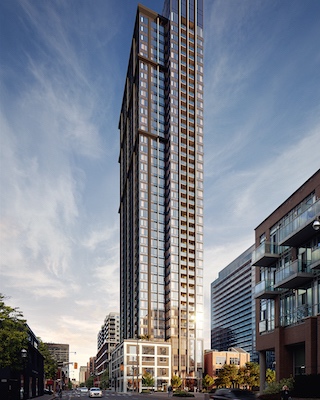 Celeste Condos at Richmond Street West and George Street in Toronto is one of two current developments by partners Alterra and DiamondCorp. (Courtesy Alterra, DiamondCorp)

Alterra and DiamondCorp will launch sales for Celeste Condominiums, a 40-storey downtown Toronto mixed-use building with a heritage component, during the next few weeks.

Alterra had conditionally purchased the property in 2018.

The respective principals of the two companies are friends and they spoke about partnering on the former bird seed factory at the corner of Richmond Street West and George Street after having a previous positive experience when DiamondCorp sold 159 Wellesley St. E. to Alterra (where it recently completed 159SW).

“We concluded that we’re of like minds and have similar values,” DiamondCorp president and chief operating officer Bob Blazevski told RENX. “We want to be city builders and look for place-making opportunities.”

The two companies closed the deal together as equal partners in early 2019, purchasing the building from a private investment group for $ 35 million.

The façade of the existing four-storey building, built in the 1920s, will be retained and feature descriptive panels and decorative bird installations. It will also form part of the development’s retail and office components.

“It’s a mixed-use development that will have ground-floor retail, possibly with a restaurant, and three storeys of office space above the ground-floor space,” Alterra president and chief executive officer Robert Cooper told RENX.

Residential condominium units will rise above the commercial component of Celeste, which was designed by Sweeny & Co. Architects.

“Alterra did the project next door (Post House Condominium), so they knew the area very well and had great success in the neighborhood,” said Blazevski. “We definitely liked the site and there were some great features to the property.”

Celeste will feature one-, two- and three-bedroom units from about 480 to about 900 square feet. Pricing hasn’t been finalized, but Cooper said it will be approximately $ 1,600 per square foot. Maintenance fees will be around 70 cents per square foot per month.

Celeste’s 18,000-square-foot amenity program will culminate with a 40th-floor rooftop space that will act as a co-working space by day and a lounge by night. It will open onto a terrace with additional work stations, loungers, fire pits and views of the city.

Celeste is located close to stops on the Toronto Transit Commission’s King and Queen streetcar and subway lines and will not be far from Metrolinx’s future Ontario Line Moss Park subway station. The location has a 100 Transit Score, a 99 Bike Score and a 98 Walk Score.

The site is also close to food, entertainment and retail options, parks, a hospital and post-secondary institutions.

The site is zoned and approved and Cooper expects to start construction this fall. He anticipates Celeste will take 42 months to complete.

Alterra and DiamondCorp have also jointly acquired a property on the north side of Merton Street, east of Yonge Street, in midtown Toronto.

“It was a matter of the success we had with Celeste being a catalyst to ride that wave of success by partnering again,” Blazevski said. “We purchased the Merton Street property and we’m excited to be going through the process and hopefully launching that one in the next year or so.”

Alterra has developed thousands of homes and condo units in Ontario’s Greater Toronto Area (GTA) and Golden Horseshoe over the past 40-plus years.

“We’ve got a lot going on and we’re busy people,” Cooper said of Alterra’s current activity, with several Toronto projects at various stages of development.

The 15-storey, 123-unit RUSH Condos at 520 Richmond St. W. is nearing completion and occupancy will begin at the end of May.

The 124-room Ace Hotel, downtown at 51 Camden St., is nearing completion and should have its grand opening late this spring.

Wonder Condos, a 289-unit joint venture with Graywood Developments that emerged from a former bread factory at 462 Eastern Ave., is nearing completion and occupancy will start this fall.

A 12-storey, 379-unit condo called 28 Eastern in the Corktown neighborhood has sold all of its units and is under construction. It’s expected to be completed in late 2024.

An existing office building at 321 Davenport Rd. was recently demolished and shoring operations have commenced for 321 Davenport, a high-end eight-storey, 18-suite condo with prices starting at $ 2.5 million.

Bloor-Islington, a proposed 10-storey, 123-unit condo located in a residential neighborhood at 36 Fieldway Rd. near the Islington subway station and Kipling transit hub, is going through the approvals process. Cooper hopes to bring it to market early next year.

St. Clair Gardens, a proposed 753-unit condo at St. Clair Avenue West and Caledonia Road, is in the planning stages.

DiamondCorp was founded in 2008 and has invested in more than 20 GTA projects encompassing more than 190 acres, more than 16,500 homes and more than 21 million square feet of density.

The development is a partnership with Kilmer Group.

Sales for the third phase of Keelesdale – a mid-rise condo and townhome development at 2175 Keele St. north of Eglinton Avenue West involving DiamondCorp, The Daniels Corporation and Kilmer Group – will launch this spring.

Brightwater is a 72-acre mixed-use, master-planned community at Lakeshore Road West and Mississauga Road South in Port Credit that will eventually have 2,995 residential units.

DiamondCorp is partnered with Dream, Fram + Slokker and Kilmer Group on the project. Sales for its next phase, a set of condo towers connected by glass bridges called Bridge House at Brightwater, will launch in June.

Crosstown is a 60-acre mixed-use, master-planned community at Don Mills Road and Eglinton Avenue East that will eventually have 4,974 units. DiamondCorp is partnered with Aspen Ridge Homes on Crest at Crosstown, a mid-rise condo on the northwest corner of the site for which sales have begun.

DiamondCorp and Kilmer Group are partnering on Birchley Park, a master-planned community of mid-rise condos and townhomes at Victoria Park Avenue and Gerrard Street East.